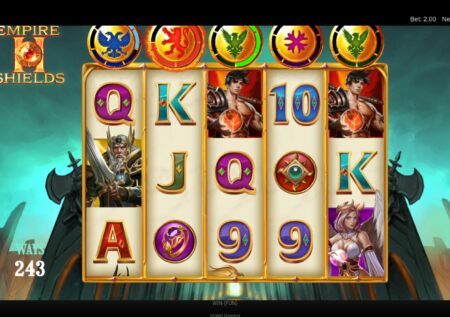 Empire Shields is a five-reeled slot by GONG Gaming and Microgaming that offers a fantasy theme with plenty of features.

These features include a wild icon, expanding wilds, game modifiers, and free spins.

Play the Game
Pros
Fantasy theme with free spins and up to 7776 ways to win
Cons
Low max wager, fixed at 20 credits.

Empire Shields slot is a Gong Gaming technologies. It is how the developer is entering the world of fantasy slots. The game is going to take you into the fantasy world and a fictional realm, where you will hunt for great epic rewards that can amount to up to 12000x the stake. The game is created in collaboration with Microgaming. The new game is packed with plenty of features, bonuses, and excellent winning chances that you can take advantage of during the gameplay. There are free spins, and random modifiers, and much more. There is no dull moment when spinning Empire Shields, and you can find all about the slot machine here through the detailed review.

Empire Shields is a medieval-fantasy-themed game. It does not have a clear plot or a storyline, but you will get to join warriors from that fantasy kingdom in a one-of-a-kind adventure.

Empire Shields begins with a 5×3 format, which offers 243 ways to win. The gameplay expands during certain features, can expand to reach 7776 ways to win. The slot takes place in a fantasy kingdom, where you will join the warriors of this kingdom. You will see these warriors on the reels as symbols, along with a variety of medieval-fantasy-themed symbols.

Empire Shields is playable across a variety of devices that support HTML5. The game's betting range is between 0.2 and 20 credits for each spin, which is convenient for most players. On the other hand, it might not appeal to the high-rollers. The game's RTP is solid and well above the average of slot machines; it sits at 96.16%.

Empire Shields is a bonus-packed game by GONG Gaming and Microgaming. One of the main features of the slot is the Wild Symbol. It is going to replace all other symbols on the reels to help create a winning combo. The wild can also activate the highest line prize when you match it on the reels. It can amount to up to 15x the stake.

You will also see positions at the top of the five reels that have Toppers. Each one of them is packed with a different game modifier. The topped charge at random, and when they go off, they will unleash their features. There is the Double Reel feature, in which extra symbols will arrive on the reels, which boosts the number of ways to win that can amount to up to 7776 ways to win. There are also multipliers that can amount to 10x, as well as a wild icon and an expanding wild.

Last but not least, there is the free spins round, which can be activated when you get from 3 to 5 scatter icons. You can claim 10 free spins, with the ability to re-trigger them.