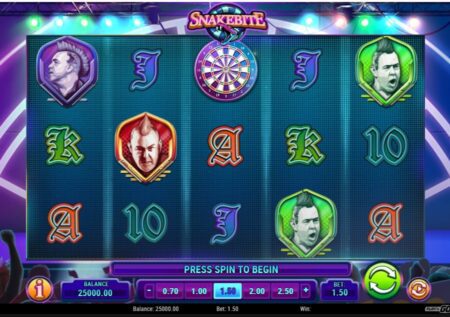 Snakebite is a 5x3 slot by Play n Go that is themed around the Darts player, which offers a high RTP and the Snake Spins feature.

Snakebite by Play n Go is a medium-high volatility slot that has a 5×3 grid that expands to 5×5 during the Snake Spins feature.

Snakebite slot is the official slot machine for the well-known darts player, Peter' Snakebite' Wright. The slot machine is by Play n Go that offers five reels and ten lines. It is playable across various devices and operating systems with stakes that start at 0.10 for each spin. The new slot machine has great visuals, with plenty of features and winning chances. It offers cash prizes, multipliers, boosters, and multipliers that can amount up to 10x. You can learn more about the slot through this review.

WHAT IS THE SLOT ALL ABOUT?

Snakebite slot is the official slot game for the dart player with the same name. That player is Peter' Snakebite' Wright. The game is by Play n Go, and it brings the dart player into the slot world through a highly rewarding and fun slot machine. The Scottish darts player has earned his nickname throughout the years. He won the World Matchplay title in 2021, and he is currently ranked second in the PDC Order of Merit. So, if you have always been interested in Darts or want to enjoy a Darts-themed game, then this new game by Play n Go is the slot you should try out.

The slot's Dart theme is apparent from the moment you load into the game. You will see that the slots' reels take place in a dart tournament with neon colors and lights behind the reels. You will even see Peter Snakebite Wright himself on the right side of the reels interacting with the gameplay. As for the icons that will appear for you on the reels, they include low-value reels varying from As to 10s. The high-value symbols include the three dart flights that come in beautiful colors with Snakebite's face on them. The highest paying symbol is the red one, which can give up to 24x the stake. There is also the Golden W trophy symbol, and there is also the special Snakebite symbol.

Snakebite has a 5×3 gaming grid with a total of ten fixed lines. You can claim prizes by forming winning combinations in an ordinary way by getting three matching symbols on the reels, starting with the first. You can place stakes by clicking on the + and – symbols on the reels, which vary from 0.10 up to 100 for each spin of the reels. The game's RTP is above the average of most slot machines, fixed at 96.2%. As for its variance, the game is of medium-high volatility, rated 7/10 by Play n Go. Last but not least, the slot offers a max reward of 6000x the stake. 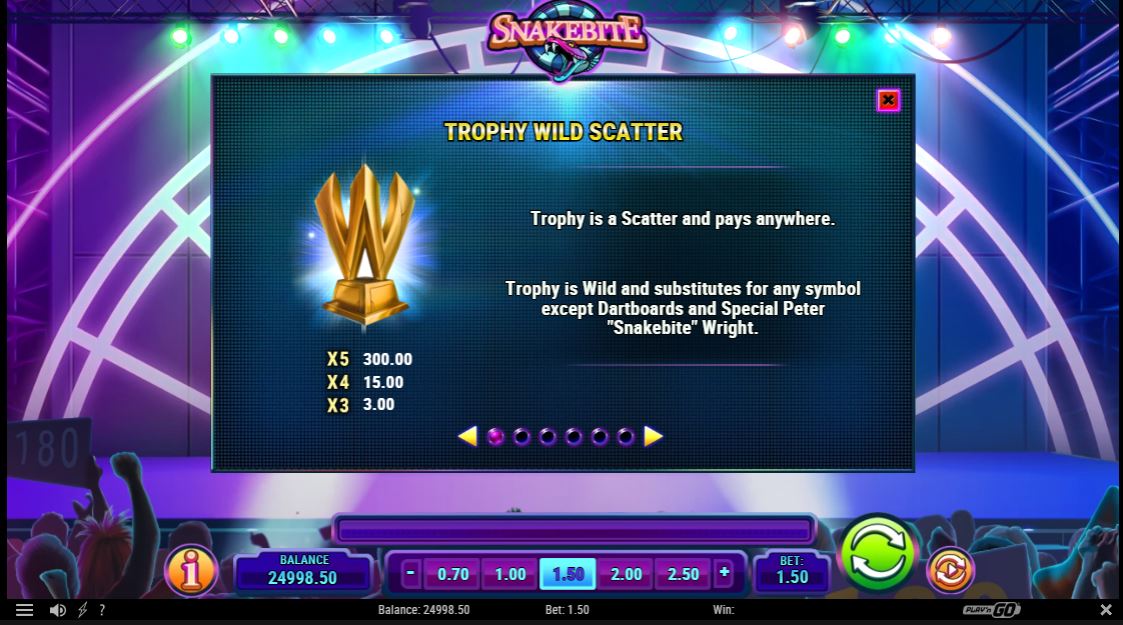 Snakebiteby Play n Go only has one special bonus feature. While this might give the feeling that it is not rewarding, that single bonus feature can trigger some great rewards. That bonus is the Snake Spins feature. You will always look out for the Dartboard symbols that can land on the first four reels. Also, you will claim scatter rewards upon getting a minimum of two of those on the reels, with the ability to trigger free spins as well. You will get three spins that will be played on the 5×5 gaming grid. You will take advantage of several features during these spins, including Golden Darts, Peter Pays, Snake Snap, and instant cash prizes.